A New Measure of Praiseworthy

A New Measure of Praiseworthy

Charm is deceitful, and beauty is fleeting.
A woman who fears the Lord—she makes herself praiseworthy.

Fat and ugly. Disgusting. These were the words spoken over me by my peers in fourth grade. And they have been the words I have believed about myself until recently.

Like all people who believe themselves to be less than or unworthy, I let people treat me that way. I dated and married a man I shouldn't have in my late teens and early twenties. He was not a good man, but I believed that was the best I could hope for. He did some awful things that landed him in jail and me a single parent to an 8-week-old just a few months past my 21st birthday. I felt like I was the cause, and I agreed with the Enemy's lies when he whispered words of shame.

Things got worse for a while, but God came after me. He rescued me and set me on the right path toward healing a few short years later.

The path to recovering my sense of worth has been a long and arduous journey.  I have learned a hard truth as I've followed Jesus - this world has a valuing system that we cannot attain no matter how hard we try. The measures are astronomical, especially for women.

We are told, and maybe more often shown, that a woman's value is in her outward appearance and all that she can accomplish. If she can stay thin yet curvy, defy gravity and the aging effects of the natural world, and be a corporate boss lady but also manage her household well, then she is worthy of honor and praise.

But that is not what God's Word says. God's truth says, "Charm is deceitful, and beauty is fleeting. A woman who fears the Lord, she makes herself praiseworthy" Proverbs 31:30 NET.

You may have heard this scripture before, and maybe like me, you know it in your head but not in your heart. I felt like God really led me to think about the making herself praiseworthy part.

For me, because of all the taunting and teasing and the false labels I developed, I just so badly wanted to be praiseworthy. In fact, I convinced my mom in my young teen years to get me a subscription to Seventeen magazines. I was sure that if I followed all of their advice, I could be found beautiful and desirable. It was the start of a long journey of trying to work myself into praiseworthiness. As I grew older, it turned into working for my worth, pleasing others so they would approve of me, and even trying to be a good Christian for God.

It's like somewhere deep inside, I know that I am significant, but the world has always told me the opposite. So, I must work (and work out) really hard to become valuable. But I had always been using the wrong valuation system. No wonder it never worked!

Listen again to what God says, "A woman who fears the Lord, she makes herself praiseworthy" Proverbs 31:30.

God's Truth is that a woman who fears the Lord makes herself praiseworthy. Period. And part of fearing the LORD means believing He sets the standard, not the world. He called you very good, even if they called you bad. He called you a masterpiece, fearfully and wonderfully made, even if they told you, you could use some work. Despite how real the world's ways seem, there is no other truth. We get to choose what we believe. We get to fear the Lord.

So if you, like me, have been trying to make yourself praiseworthy in the eyes of the world, using their standards, it's time to let that go. One, you are likely so tired of ever striving and never measuring up. But secondly, it is not the truth. The truth is that you don't need to prove your worth. You have already been proven worthy. Jesus thought you were so worthy; He died for you!

Yahew, king of the universe, your way is so much better. Only you get to set the standard. Help us to break up with the world's ways, lies, and valuation systems. We know they are not the truth, but we have submitted to them for so long. Free us from these lies and help us to know the truth in our heads and our hearts. You have laid the foundations of the earth and created each one of us as your masterpieces specifically designed by you. Write this truth on our hearts and speak to each one of us about how you really see us. In Jesus name, Amen.

It is Written - Battlecard 2

For those who are tired of trying to make themselves praiseworthy the world's way and want to believe the truth that they are already worthy in the eyes of God, or hearing any of the following lies:

I will be beautiful if I _________(could lose weight, did not have these wrinkles, had better style).

If I could just do this one thing better, then they would all like me.

I will never be as good as her

They will all approve of me if I (fill in the blank).

Get the battlecard and screen saver and FIGHT with the TRUTH God says about you over the next week. 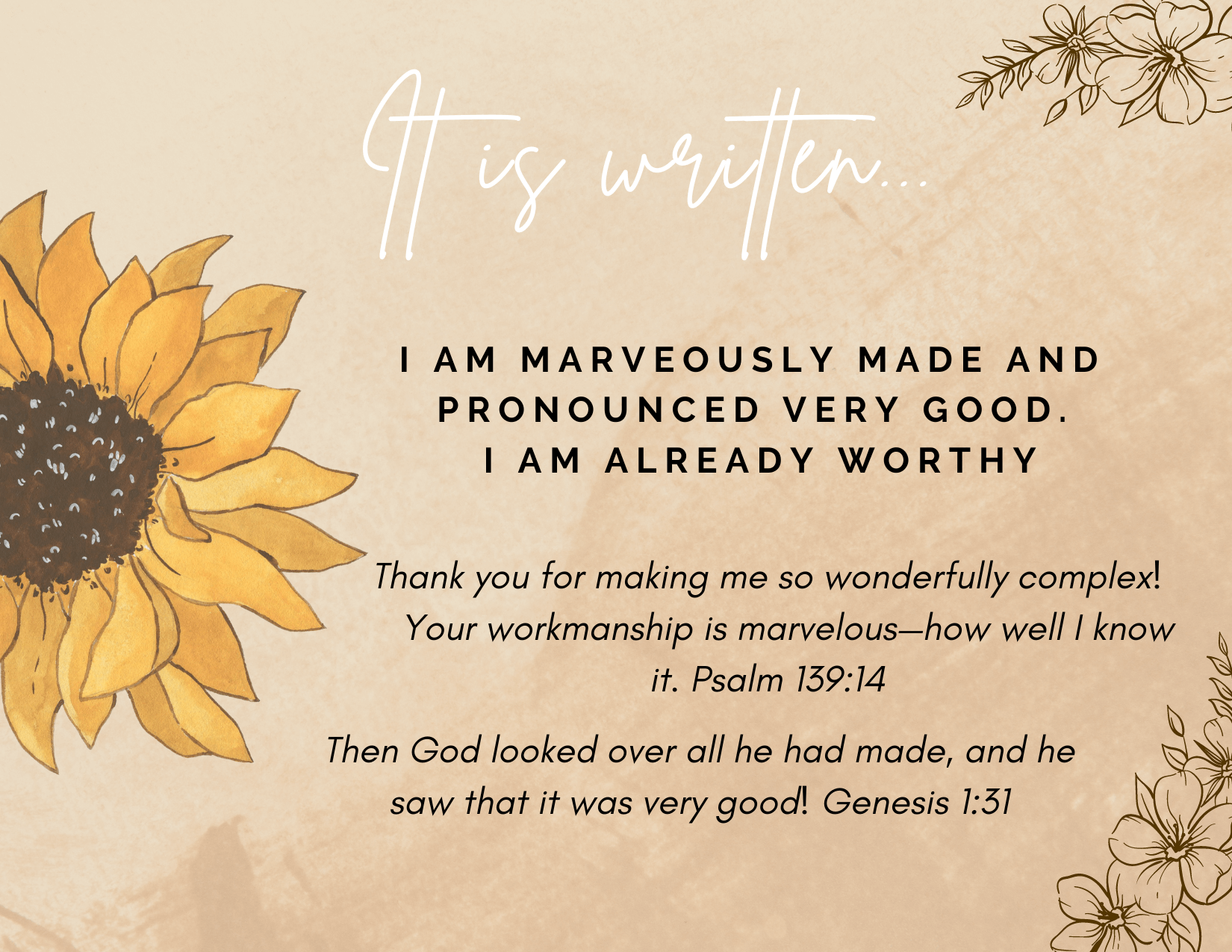 Thanks for subscribing! Please check your email for further instructions.

Something went wrong. Please check your entries and try again.
Posted in Breaking Free, Breaking Up With the World

Enter your email below to recieve updates and notifications of new devotionals.