Heart deflated in my chest, I prayed that I would just fall asleep. I was over this day filled with hard news and a lack of clarity for the next steps. It is so daunting to be standing at the fork in the road you did not expect...again.

"Father," I prayed silently, face buried into my pillow "it is after 9 pm and I have to work tomorrow so I need to fall asleep, but I would really like you to settle this situation with a clear answer. I am afraid, no, I am desperate for an answer. I need you to show up."

Earlier that day I had been given hard feedback from a well-known publicity agency who I had hired to help me get the book into more readers' hands. They were not crazy about the cover. They felt it could be the reason I had struggled to gain traction. Worse, they informed me that they did not feel they could help me unless I changed it. But changing the outside meant changing the inside to match as well. And that would not be cheap. I had a big decision to make. One that 24 hours prior was not remotely on my radar.

My soul felt the weight of this decision far more than my finances. You see, it was not a straightforward choice to simply redo the cover and interior or not. The stakes were much higher than a few graphical images. The real choice presented to me that day was whether I was going to choose to continue believing God about who He says I am and His plan to spread the message He gave me, or to walk away from what He had said due to the unexpected hardship.

Would I believe He was still going to do what He had said He would do, or not?

Candidly, there was an angry part of me that just wanted to walk away. It seemed so much easier to put the book on the proverbial shelf and forget the dream that seemed even less plausible now. Skepticism wanted to take over. After all, it was not very practical to spend even more time and money on this project. A worldly investor would probably advise against it.

But there was another part of me that just would not relent to the newly presented challenge as a give-up point. A tiny flicker of hope whispered that this was an opportunity to begin again with all the things I had learned in the last year about who God says I am and what He was equipping me to do. Rather than the end of the road that it appeared to be at first, it was simply a fork in the road that God had predestined for me.

Not to be taken lightly though. It was a significant fork in the road and my soul could feel the weight of it. Would I believe the small voice that whispered it was still worth believing in or would I stamp it as a learning lesson and walk away?

The truth is that we are presented with choices every day. The brokenness of the world and the destruction the enemy causes along our journey causes potholes, dark patches, and twists in our paths. The journey is not straightforward and it is filled with things that cause us to fear and doubt. We must hold onto the promises of God as our guiding light and the lamp unto our feet so we do not get lost along the way (Psalm 119:105).

Mary, mother of Jesus was presented with many choices along her path of raising the Savior of the world. When the angel first visited her he told her God's plan and she believed. But her path was filled with hardships. At first, her betrothed did not believe her and almost divorced her. Then King Herod tried to kill them and they had to escape to Egypt with baby Jesus. Finally, she endured watching Jesus, the son she had raised, be arrested tortured, and killed. At each one of these difficult junctures, she had to choose to believe in what God had said when He first visited her and when Jesus was born.

Here is how she did: "Mary treasured up all these things and pondered them in her heart" (Luke2:19). Mary is mentioned treasuring and pondering supernatural evidence twice in the Bible. These mentionings are of no small consequence. They give us a practical practice for continuing to believe the impossible when presented with circumstances that have us questioning the whole plan. 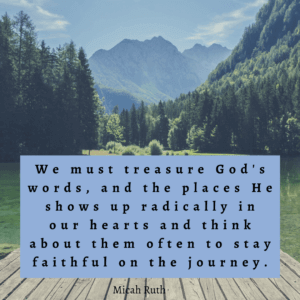 We must treasure God's words, and the places He shows up radically in our hearts and think about them often to stay faithful on the journey. We must lean into the light when all we see is darkness. And we must reorient ourselves to the promises of God when presented with an unforeseen and unwanted fork in the road. After all, faith is the belief in things unseen and moving forward in obedience anyway.

Lord, help us to believe in what you have said despite the junctures present in our lives today. Help us to believe in your promises even when they seem more and more impossible. We know that you are not limited by the roadblocks that seem to stand in our way and we know that you can make a way when there seems no way. Remind us today who you are and what you have said and fill us with the courage to move forward. In Jesus' name, Amen.