The problem with a broken heart is that it needs to be tended, not disregarded if we want it to work properly again. An unhealed heart is an easy trap for the Enemy to use against us. He had been doing so in my life for years. These were the crucial lessons God taught me in the week that I took off from work to finally stop running and hiding to heal.

That summer, just months after the demotion, had ushered in another trying time for our family. But this time instead of being about work, it brought up all the unhealed hurts from my past. I felt like I was reliving the nightmare I had lived through in my 20's. Or maybe I was being punished for all the wrong choices I had made back then. But God wanted to take me deeper into my heart. He wanted to reveal the lies that were spoken over me nearly 30 years ago, that I still believed.

God had me take a week off from work to just be with Him. I had never done such a thing before, and honestly, it was terrifying to stop moving forward and dive into the past. There were no plans except to hike and mountain bike and talk with God about the places in my battered and bruised heart that I had tried to stuff away.

One of the days, I went on a long hike on the infamous Colorado Trail, where it starts in Durango. It follows a seasonal creek that was a torrent just then due to the melting of the record-breaking snowpack we had received that year. Nearly at the end of the hike, God had brought forth a memory from fourth grade. I knew this was a significant memory because it was one of the only memories I have from my childhood.

When I was in fourth grade I had a friend whose name was David. Looking back now I can see that he was either homeless or very poor. He wore the same clothes every day and he did not smell great. I did not care though. He was the only kid who was nice to me and would play with me. We played together every day. Normally, out of sight at the edge of the playground to avoid the taunts of the others. But one day, we decided to play on the yellow money bars in the middle of the playground. We got teased something like this:

That was the day I became the fat girl, and I had believed that something was wrong with me ever since.

But as I sat on the rock by the rushing water, tears streaming down my face, that day on my hike 30 years later, God reminded me of the truth. He reminded me that He does not judge on the outside as the world does. And He told me again that He created me wonderfully. A beautiful design of the master craftsmen. I just had to believe Him and let His love heal the wounded heart of the nine-year-old girl and not allow myself to conform to the world's standards.

I finally let His love and truth be the truth in my heart. After all, only God, the one who created you can speak to who you are. Everything else is a lie.

I learned that day that this is redemption, the ultimate work in Christ. When we allow God to redeem our past, we are set for a better future. Friend, I don't know what the world has lied to you about who you are. I can't imagine what pain you have been through. But God can, and He wants to heal you. He wants to redeem your heart and free you for your better future. Is it time to let Him?

Lord, your love never fails. It never ends and it is enough to heal all my wounds. Help me to trust that your Truth is true for me too. Help me to know that your love can heal me and that you want to. Help me to let go and let love cover me. I want to be healed. In Jesus' name, Amen. 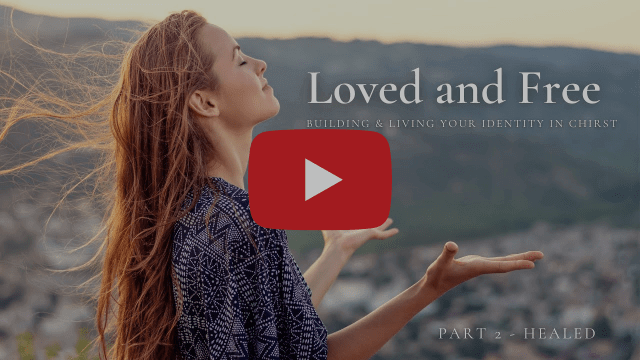