Have you ever thought when someone says –"just be yourself"...

I used to think this every time when I heard someone reference just being yourself until I realized that I had been spending so much time trying to be everything they wanted me to be, that I had lost who I was. She had been gone for so long, I truly could not remember who she was.

But on Good Friday, a few months into my journey of studying Ephesians and rebuilding my identity in Christ, God asked me to bury the lies that I had believed about myself. After all, they needed to die and what better day to bury something that needs to be redeemed than Good Friday?

So I rode my bike on that beautiful spring morning up to the largest twisted pinon tree I have ever seen on a mountain bike trail that winds through a high mountain desert. On a piece of paper I had written all the lies I had believed about myself like I was not good enough, and I had to work harder than everyone else and folded it up and placed it in my camelback. After digging a little hole at the base of the tree, I placed the paper in and then reburied it. I also placed a small rock that I had found over the place I had dug up the dirt. It was symbolic for me. A death of things that badly needed to go. 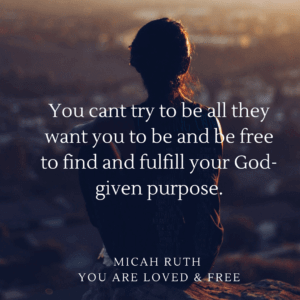 What I did not realize at that time was that this would start the resurrection of my true self. But it did. And I learned one of the most important lessons of my life that season; You cant try to be all they want you to be and be free to find and fulfill your God-given purpose.

But here is the great news. God wants you to be free. He sent His son to die to free you. He created each of us in a specific way with dreams that reflect His image and glorify Him. When we surrender to Him and His plans for our lives, we actually find ourselves. The real person that He created us to be.

Just as soon as I had buried the lies, refusing to believe them anymore, and jumped back on my bike I felt an amazing sense of freedom. And just a few minutes later, while I was praising God for all that He had done to free me in that season, winding back downhill towards my car, I heard Him tell me to write the story into a book. That would have seemed preposterous to me even a few months ago, but it had been a dream in my heart since I was little to be a writer. And I did it. I wrote it into a book, got it published. It has been a wild adventure ever since that day I chose to believe in God's freedom.

God is so good. He desires our best and has good plans for us. Plans that include freedom to be all that He created us to be. Freedom to let go of all the other things we think we have to be. But it is in surrender to God and His plan that we find the ultimate freedom.

The fourth step to rebuilding our identity in Christ is to surrender to who he created us to be by joining our whole life with Him in complete abandon. As we build a relationship with Him and let Him lead, we find His ways are easy and His burden is light (Matthew 11:28). Compare that to the hustle culture and you’ll find a freedom like you’ve never known before. You could even find the freedom to just be you.

Let's Pray: Papa, thank you for your goodness. Thank you for your death on the cross so that we could be free. Help break me out of the bondage of the world's ways that I have submitted to, so I can be free to be me. Show me who I am and the desires of my heart that you put there at my creation. And give me the courage to follow you and your plan for me. I want nothing more than to be with you. In Jesus name, Amen. 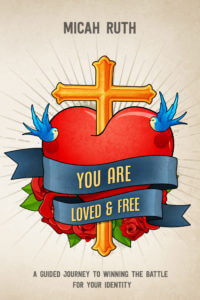 Do you know who you are?

Living in a culture where your achievements define you makes you prey to attacks on your very identity. But God values you regardless of your wins and losses and provides the tools in His Word to help you win the battle and rebuild your identity on His truth as you walk with Him into your purpose.

Born achiever Micah Ruth found herself questioning her value during a career demotion and personal crisis. Feeling like a failure and questioning her every move, Micah began listening to God as He led her to make major life changes and reassess the source of her worth. Through exploring the book of Ephesians, Micah uncovered the lies that held her captive and broke the self-inflicted chains of shame to ultimately experience deep soul transformation.

Micah weaves her story as inspiration for you to embark on your own journey of freedom and discovery. Devotionals, journal questions, and practical application prompts provide opportunities for you to remove your armor of self-reliance, grow in your faith, and reflect on your story. You Are Loved & Free also includes resources to help you discover your gifts and purpose while you cling to your newfound identity as a beloved and free child of God!

Get Your Copy Today!
Posted in Living Loved & Free, Uncategorized and tagged be you, child of God, free to be, freedom, identity, identity in Christ, Loved and Free, spiritual battle, Truth