Are you sure about this healing thing, God? I lamented, looking to the sky. I had been working on healing from my past trauma with God for years by this early morning hike. But an emotional trigger the day before had left me reeling... yet again. Did that mean I was not healed? I wasn't sure, and doubt-filled thoughts paraded through my mind non-stop.

Thoughts like, shouldn't I be more healed by now? Why does it feel like I keep regressing?

And the worst thought of all - if God is truly a healer, then why does it feel like I am not healing at all?

But just as I was about to succumb to the doubts, God told me to look up the story of doubting Thomas. This is what it reads:

Now Thomas (also known as Didymus), one of the Twelve, was not with the disciples when Jesus came. So the other disciples told him, “We have seen the Lord!”

But he said to them, “Unless I see the nail marks in his hands and put my finger where the nails were, and put my hand into his side, I will not believe.”

A week later his disciples were in the house again, and Thomas was with them. Though the doors were locked, Jesus came and stood among them and said, “Peace be with you!” Then he said to Thomas, “Put your finger here; see my hands. Reach out your hand and put it into my side. Stop doubting and believe.”  Thomas said to him, “My Lord and my God!”

Then Jesus told him, “Because you have seen me, you have believed; blessed are those who have not seen and yet have believed.”  John 20:24-29

I read it and immediately hit my knees in a desperate prayer. "Lord, will you please show me your nail-scarred hands?" I cried. "I know I should believe, and I do believe, but help me in my unbelief!"

God answered the cry of my heart that week in a few amazing ways. First, a podcast I follow posted a new episode titled "How do I know if I am healing?" I almost fell out of my chair when I got the notification. It was exactly what I needed to hear. But God was not done with the miraculous yet. During the mid-week, I received a well-timed devotional about submitting to God's healing process. Then, at the end of the week, we started our new Bible Study series, and the first chapter echoed all of what God had been telling me.

God had shown me his nail-scarred hands. I was beyond grateful for the goodness He showed me, even in my doubt, but I knew my job was not done. I needed to commit myself to fighting the Enemy's lies. For too long, I had let him reign over my mind.  It was time to fight, and I had a perfect example to follow - Jesus.

Jesus fought the devil's temptations in the wilderness and won. He was not a sinner because the temptations came. He was victorious because he battled and did not succumb. He gave that power to me as well, so now it was time to fight. So I looked up His time being tested again, found in Matthew 4:1-11 and Luke 4:1-13, and noticed a pattern. Jesus battled each temptation saying, "It is written." Some translations say, "The Scriptures say", or "it is said", but they all point to Him speaking the Word of God relevant to the temptation.

Jesus answered, “It is written: ‘Man shall not live on bread alone. Luke 4:4 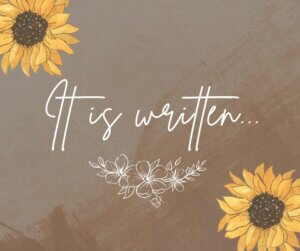 Jesus answered, “It is written: ‘Worship the Lord your God and serve him only. Luke 4:8

When I agreed to do the work of battling the enemy's lies, God made it really clear I needed to fight like Jesus. How did Jesus fight? He spoke God's Word over the lies. Three times he started his response with "It is written", or "it is said." So that is what I would do too. Maybe it is time for you to fight like this too?

Over the next few weeks, I will be sharing how God revealed the lies that I believed, what I found when I sought His truth, and battle cards and screen saver downloads you can have to fight too! I hope you will join me in this fight against the liar. Jesus said that the Truth will set us free and He came to set the captives free! So let's be free.

Father, you are so good. You gave us your Word which is alive and active in us. Help us to stand up and fight the Enemy. You have already made us victorious, but we must engage in the daily battle for our minds. But you gave us the battle plan too. So help us to know your Truth, and may your Truth set us free.

It is Written - Battlecard 1

For those struggling to believe that God is healing them or hearing any of the following lies:

God is not going to heal you. He hasn't yet.

If God is healing you, why is this still an issue?

You just did that thing again. See, you mist not be healing.

You should be more healed by now.

Get the battlecard and screen saver and FIGHT with the Truth over the next week.

Please enter your name.
Please enter a valid email address.
Get Yours Now!
Something went wrong. Please check your entries and try again. 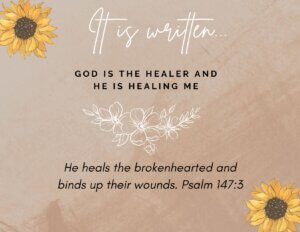