“Which of these three do you think was a neighbor to the man who was beaten by the robbers?” The man who knew the Law said, “The one who showed loving-pity on him.” Then Jesus said, “Go and do the same.” Matthew 10:36-37

My hurt son and I experienced the love of neighbor Jesus talks about most unusually this week. It was a small gesture of kindness big on compassion and love.

My poor little guy took a bad crash from his mountain bike, splitting just below his eyebrow open. Heads bleed profusely even in minor injuries, so by the time we got to the hospital, his cherub face was covered in dried blood. As were his hands, shirt, even his shoes. This gained sympathy from all the people waiting in the waiting room. Much like me, it was hard to see such a sweet little face covered in blood, even though we all knew he would be okay.

In an attempt to make him feel better, I walked over to the vending machine to buy a soda. Soda is a special treat in our family. Perfect for a moment like this. But the credit card swiper was out of order, and mama had a dollar in change, but not a dollar and seventy-five cents, which is what soda bottles now cost in vending machines apparently.

Resigned to not getting a soda we sat back down in the chair we had claimed in the waiting room. He did not make a fuss about not getting the soda, but many of the patrons did. Even after my decline to take money from a few of them, one older biker-clad woman decided that she was not taking no for an answer and was buying him a soda. She did, and she broke all the covid rules they were attempting to enforce to give it to him too. She came right up to his swollen and battered face and handed him the green bottle of soda reassuring him of his toughness and that it would be okay. He perked up a bit, smiled, and said thank you, as tears swam into my eyes.

Four stitches and four hours later, as my head cleared with the knowledge he really would be okay, I thought back on the moment with the soda. It made me think of Jesus and the story he tells about the good samaritan in Luke 10:25-37. Currently, our world is filled with fear and distancing. We have been told to move away from people to protect ourselves. And while that may be scientifically a good way to stop the spread of the virus, that is not the only distancing we have been doing from each other. For all human history, we have also been plagued by social and political divides and polarized in our beliefs. We created divides and distance ourselves from others even without a pandemic.

It is not so different from the social climate in the story Jesus shared. Samaritans and Jews were polarized. They did not speak, they did not do life together, and they avoided each other like the plague. But when the good samaritan saw the man robbed and left for dead on the side of the road his compassion moved him past all those divides and compelled him to help. Just like the biker woman in the waiting room who did not judge first if my little boy and I are on whatever side of the myriad of social divides she could be. She did not care that we are mountain bikers, while she is a motorcyclist.  She was moved by compassion to help a hurt little boy and a helpless momma overcome a broken vending machine, just to provide some joy to someone who was hurting. And with her actions, she demonstrated what loving your neighbor means. 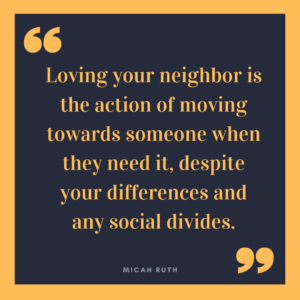 Loving your neighbor is the action of moving towards someone when they need it, despite your differences and any social divides. And your neighbor is any person God puts in front of you that you can help in some way. Whether it be physical help or encouragement for someone's heart that has been robbed of love, peace, and security is all the same to God. Whether it be a big help, or as small as a soda for a little boy matters not either.  These are the simple actions of love that change someone's world today and have the power to change the whole world for good.

Oh, how I wish I could tell her that she showed Jesus today. But since I can't, I will vow to be more like her and pray this simple prayer over all of us in her honor: May we all be moved by compassion to help our neighbor in whatever way God is asking us each day so we can bring love to our world. Amen. 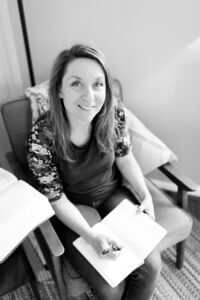 Hi, I am Micah. I a wife, mom, and passionate follower of Jesus, trying to learn how to follow His ways. For all of my life I have been trying to measure up to the world's standards, but Jesus freed me from that a couple of years ago. Now I am trying to live Loved & Free by learning more about God, His Kingdom, and breaking up with the world's ways.

Will you join me on this journey towards freedom?