Therefore, if you are offering a gift at the altar and remember that your brother has something against you, leave your gift there in front of the altar. First, go and be reconciled to your brother, then come offer your gift. Matthew 5:23-24

We have a new uninvited and rather strange resident at our house. He is a robin who we have jokingly named Robinator. It is a mix between Robin and gladiator. A fitting name for this bird. He is a fighter.

For the past several weeks, he has decided that the huge ponderosa pine tree outside of our house is his new home. The only problem is there is a window on that side of the house where apparently he can see his reflection. The reflection that has become his arch-enemy. He insists on attacking said enemy by flying at the window feet first, hitting the reflection, and flying back. Multiple times in a row every morning. To my dismay, he has done this so many times now that there is a spot on the window. A window two and a half stories off the ground.

For a few days, we thought this was funny. We also thought he would stop. But two weeks into this war with the window, I started to get worried about this robin. Would he spend the rest of his life attacking the enemy that is not there?

As soon as I pondered the question, I felt the conviction in my spirit. You see the enemy has played me often in my life. He puts up smoke screens and mirrors that have me conjure up enemies that do not exist. Thoughts just after a meeting that I hurt someone's feelings with something I said. Worries that a friend is mad at me because I have not heard from them in a while. And my husband's all-time favorite (said in my most sarcastic tone), feelings of rejection over his being several minutes late when I know he gets caught up talking to people. Like every single time.

The truth is the enemy wants to make enemies out of people we are in relationships with because if he can divide us he wins.  Just like the robin's reflection, he 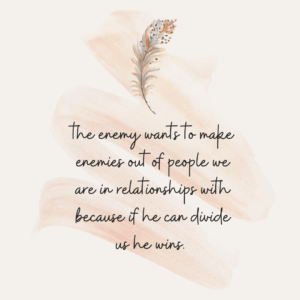 creates enemies in our minds that do not actually exist. He uses the hurt and healing parts of our hearts to play people against us. And just like the robin, we often take the bait. We let the thoughts or worries fester, then build resentments, and suddenly we are waging a war against the false enemies while the real one chuckles in the background.

We build walls around our hearts, thinking we are protecting ourselves but ruin relationships in the process. Worse, broken relationships with our fellow humans push us away from God. The life application commentary for Mathew 5:23, 24 states, "Broken relationships hinder our relationship with God." No wonder resolving conflict and reconciliation is so important to God. And no wonder the enemy uses this tactic. He wins in his ultimate scheme to keep you away from God and hurt others when he pushes us away from each other.

But we do not have to let that deceitful devil win. Instead, God tells us to go to our brothers (sisters, husbands, friends, and coworkers) when we remember a grudge they have against us before coming to him to make a sacrifice (Matt 5:23,24). God wants us to resolve conflict to restore relationships as soon as possible. But this is radical reconciliation that requires radical love and self-sacrifice. Alone, we could not accomplish this. But we are not alone. We have the power of the Holy Spirit, a love is so powerful it outwon death, living inside of us to help us overcome.

As called apart children of God, filled with the indwelling of the Holy Spirit let's be more aware of this false enemy tactic the devil employs. Let's be aware of the random thoughts that pop into our heads, especially the ones about people we are in relationships with. And let's defeat our scheming enemy by bringing these lies to God and letting His love overcome.

Father, help us to be different through the power of your love living inside of us. Reveal to us the tricky schemes of our enemy as we bring his lies and our hurt feelings to you. Help us grow in discernment and in the love that keeps relationships in tact. You are a relational God who created us to be relational too. But we need your help because relationships can be hard and resolving conflict is the hardest. Thank you for the love that helps us in all things. In Jesus name, Amen. 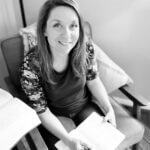 Join us Growing in Truth and Walking Towards Freedom!

Have you struggled with feeling good enough or measuring up for what seems like forever? Me too. It is no wonder. We live in a world of measures and strife. But Jesus said that He has a better way. He came so we could know the truth and be set free.

Join my weekly devotional where I share the Truth that God is teaching me as I journey through this real-life with Him.