"Again, the Kingdom of heaven is like a merchant searching for fine pearls. When he found a pearl of great value, he went out and sold everything he had and bought it." Matthew 13:45-46

Filled with pleasure from the smell of the forest burning off morning dew in the rising sunshine, I reached down to the hip pocket of my biking backpack as I stopped at the end of the trail. Panic ensued as I realized my phone was missing. I had it not too long before this moment. I know because I had been listening to a book on audible while pedaling uphill. Once I had finished the chapter, I put it in my left hip pocket like I always do when I come to the downhill part of my ride. But it was not there anymore.

My brand new smartphone was gone.

My stomach quivered as I realized it must have popped out of the pocket while I was riding. How was I ever to find a phone in the lushly grown-in forest I had just ridden through? It would be like searching for a needle in a haystack. I panicked.

Turning back up the trail on foot, I retraced the route I had just come down with eyes peeled. It really did not matter that I needed to get home and shower for my meeting. I needed to find my phone more.

Thirty minutes later, I had retraced the whole trail back to where I know I had placed the phone in my pocket. Nothing. I had not found it as I had so hoped.

Negative thoughts racing, I hurried home, told my husband to start calling me as often as he could, and grabbed my two little boys to head back up to the trail. We were going on a treasure hunt. Right now. They were game, but I would be skipping the keynote and first session of the conference I was supposed to be attending during this time. Still, it seemed reasonable. After all, I needed the phone for every part of my life today. How would I function without it?

After hours of treasure hunting with no results, we returned home. A few minutes after our return, my husband, now at work, emailed me that a neighbor found my phone ringing in the forest on their hike. They called my husband, and he told them I would retrieve it from them immediately. Another scheduled meeting was missed, but I had the phone in my hand, and all felt right again.

A little later in the day, God asked me if I felt this way about His treasure? His Kingdom. Would I search for hours for His Kingdom, abandoning all else as though my life depended on it?

One day when Jesus was teaching to a large crowd that had gathered around Him, he taught two parables about the value of the Kingdom of God. The first one was the parable of Hidden treasure found in Matthew 13:44.

"The Kingdom of heaven is like a treasure, hidden in a field, that a person found and hid. Then because of joy he went and sold all that he had and bought that field." Matthew 13:44

The second is the parable of the Pearl Merchant, right after in Matthew 13:45-46

"Again, the Kingdom of heaven is like a merchant searching for fine pearls. When he found a pearl of great value, he went out and sold everything he had and bought it." Matthew 13:45-46

In both illustrations, Jesus is teaching about the value of the Kingdom and how important it should be to us, regardless of how we find it. Sometimes we stumble upon it as we are living life. But when we do, we should grab hold of it by selling everything we have to gain it. We go searching for it other times, knowing it is the most valuable treasure we could ever have. 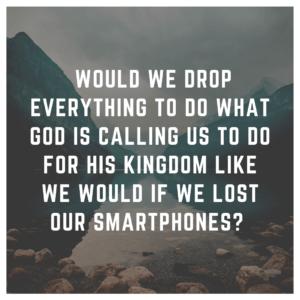 But do we really live like the Kingdom of heaven is our greatest treasure? Would we drop everything to do what God is calling us to do for His Kingdom like we would if we lost our smartphones?

Likely, we don't because we are distracted by so many other things. Can I first tell you, God knows how hard this actually is, and His grace covers you. But can I also tell you that God's Kingdom, His plan, and His way is so much better than other things we often put in the front runner?

Often we put the approval of others in the first place. That is a life of slavery and striving. God's way is rest, and His burden is light. Matthew 11:28

Often we chase wealth because it makes us feel secure. But wealth is fleeting and can easily be destroyed and taken from us. God calls us to lay up our treasures in heaven where no one can take them. Matthew 6:19-21

Often we chase the world's definition of success as though it would fulfill and content us. But it doesn't. The whole in our souls was made to draw us to God.

But here is the good news: "Seek the Kingdom of God above all else, and live righteously, and he will give you everything you need." Matthew 6:33

Lord, Help us to seek your Kingdom above all else. We cannot do this alone. Help us to follow you in radical obedience. Show us anything we have placed above you and help us to surrender it so we can put you back on the throne of our lives. We thank you that you are a good God. You know what we need to live and promise to care for us as we seek you first in all things. In Jesus' name, Amen.

Join us as we Break up With the World to Truly, Truly Follow Jesus!

Are you burned out? Tired of hustling and never measuring up? Do you think there could be a better way?
Jesus has been teaching me that He came to break the rules and set us free! He has been totally shifting the way I think and live as I have surrendered to follow Him. I see now that His way is better and I want to share with you what He has taught me.
He really is the way, the truth and, the life! Join me and others through live weekly sermonettes, group discussions, and challenges in our Facebook Group to break up with the world to truly, truly follow Jesus.
Join Here
Posted in Rightful Heir and tagged God's Kingdom, Good news, Gospel of Matthew, micah ruth, parable of the pearl merchant, searching for treasure, Seek first the kingdom