Can I tell you about an embarrassing moment I had with God on one of my Saturday morning bike rides?

For nearly a month, I knew the answer for getting out of the seeking approval of man was to practice seeking God's approval instead. I knew I should start capturing my approval-seeking thoughts, both "good" and "bad," denounce them as the enemy and seek what God had to say instead for a while.

But honestly, I procrastinated because I was not sure that I could do it. It seemed too hard. Changing well-worn neuro-pathways that were hardly recognizable, with an enemy purposely against the change, and trying desperately to keep me enslaved would certainly not be easy. But in a way, what I was saying was that I did not believe God could do it either.

I could not see a way out. For decades I had cared so much about what others thought about me that I was not sure I had any other thoughts at all. I did not believe I could change this.

So I danced around the knowledge and task. I even pretended I did not understand what God was asking me to do for a few weeks.

But on this glorious Saturday morning, as I rounded the corner in one of my favorite forests, I got a bit of an "ah-hem" from God. It is a good thing He is compassionate and gracious, slow to anger and abounding in love. He was trying to help me get out of the cage of slavery, and I was running right back into the cell and slamming the door in His face (Psalm 103:8).

But on this Saturday morning, He caught me. After another miserable week at work trying to measure up to all they wanted me to be and failing, I was ready for something else. Exposed for the lie it truly was, was the belief that I needed other's approval to feel valuable. God was inviting me into another way. Finally, I was ready to believe.

In our key verse, John 1:51, Nathanael does not believe his friend Phillip that Jesus is the Messiah because his culture taught him that no good could come from Nazareth (John 1:46). Nazareth was a small and poor town that the Jewish culture looked down on. But Jesus changes open Nathanael's heart by telling him about a time when He saw Him sitting under the fig tree. This moment was significant because Nathaneal was alone pouring his broken heart out for the Jews under Roman rule. Nathaneal realizes in an instant that God saw him and heard him. Then Nathaneal proclaims, "Rabbi, you are the son of God; you are the King of Israel" Once Nathanael believes Jesus is the son of God, he tells him that he will see "heaven open, and the angels of God ascending and descending on the son of man" (John 1:50 -1:51).

Much like Nathaneal, we may have some cultural beliefs that are blocking us from believing the truth. So, examining our beliefs by looking hard at our motivations is crucial. Throughout this series, you will see that what we believe in our hearts is the most important thing to God. God knows that our beliefs inform our motivations, which turn into our actions, which become the sum of our lives. Belief equals life. 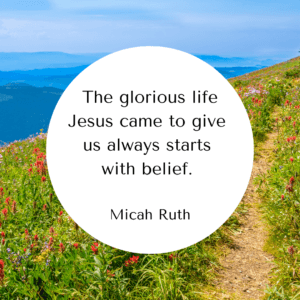 The glorious life Jesus came to give us always starts with belief. So, again like Nathaneal, let's get the core belief right first, and then let everything follow. So here is the core belief that Jesus reveals repeatedly; he is the Messiah who came to save us through His death. Coming to die for us was the only way to reconnect heaven back to earth. Our sin caused a divide between man and God, but His death made a bridge for us back to a life with God. The good life we were created to have.

That Saturday evening, I started a new practice of going to God for approval. Slowly, but surely the thoughts about what others thought about me began to cease, and I began to walk a path that I would never have imagined in my wildest dreams. A way designed just for me.

Let's ask Him now for changed hearts and help to believe:

Father, soften our hardened hearts that we may believe. Help us to shed our false beliefs so we can replace them with your truth. We believe that Jesus is the way, the truth, and the life. Open our hearts to you so we can truly hear and truly see. In Jesus's name, Amen.